Arab Tea: Different Types And Their Names In Arabic

Tea is a central part of Arab tradition and is consumed in every country where Arabic is spoken. It's a social drink in Middle Eastern culture, and is customarily served to guests.

How to say tea in Arabic

The word for tea in Arabic is شاي (pronounced shay).

Like the English word tea and other global variations, it traces its origin back to East Asia (China).

The importance of tea in Arab culture

Tea is more commonly consumed than coffee in Arab culture, and people generally drink it at every meal, including dinner. It's also more common for Arabs to drink tea without milk (unlike English culture where it is more common), though some people do prefer it this way. Arabs also tend to use heavy amounts of sugar in their teas, making them quite sweet.

Cups are usually made of glass and pinched between two fingers (or glass cups with handles). Porcelain cups are less common.

While there are some common characteristics of tea in the Middle East and North Africa, there are some differences and preferred types depending on where you go.

This is not an exhaustive list, but these are the main types you'll encounter:

Standard black tea. This is an umbrella term that could include English Breakfast or Earl Gray variations of black tea for example.

Mint tea is extremely popular in most Middle Eastern countries and is usually a cup of regular black tea (see above) with a lot of sugar and a bunch of fresh mint submerged in the cup. It's refreshing and good for the bowels.

There is a variation of this mint tea found commonly in the Maghrib (Morocco, Algeria, Tunisia, etc.) which uses spearmint leaves in place of regular mint for a stronger flavor. 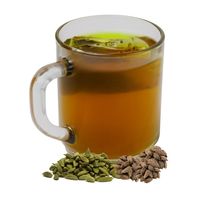 Cardamom is a common spice used in Arab food and beverages. It's extremely common (and delicious!) ground up in Arab coffee, but it's also commonly used in tea as well. It's also great for your liver and acts as a natural anti-inflammatory.

Chamomile flower is used all over the world for its calming benefits. It's great as a sleep aid. Arabs also consume chamomile tea (though less common).

Anise is actually native to Egypt, so it's no surprise that the Egyptians and neighboring cultures use it in their teas and other consumables. It has a strong licorice taste and a wide range of health benefits.

Sage is native to the Mediterranean region and has been consumed for centuries. It's commonly used in tea (either added to regular tea or made on its own) and is extremely beneficial as a high antioxidant source.

Thyme is another native herb to the Mediterranean region (Egypt, Syria, Lebanon and Palestine most notably). It's a good course of Vit C and potassium, and is frequently consumed on foods and as tea.

While not as much of a common beverage in the Arab world, some Arabs do prefer green tea for its health benefits.