Iraq is a country rich in heritage and tradition, and Iraqi food is no different.

Iraqis have a deep appreciation for their own cuisine, and although Iraq doesn't have a specific cooking style, the country does have many dishes that are native to it.

The food in Iraq is heavily influenced by its neighboring nations, but it is one of the few countries in the Middle East with a truly unique cuisine.

In this article, we're going to take a look at some of Iraq's best-kept culinary delights. 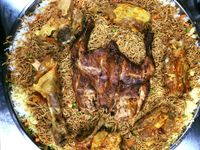 Quzi often written qoozi or ghoozi, is a popular rice-based meal which is regarded as one of Iraq's national dishes.

This delectable slow-roasted stuffed lamb is usually filled with rice, veggies, nuts, and spices and cooked at a very low heat in a submerged or closed oven.

It is traditionally one of the most popular meals at any Iraqi festive occasion or family gathering.

The gem of Iraqi cuisine, Iraqi dolma, is a meal you must try if you have the chance. It is a national dish of Iraq for a good reason.

This dish is the king of filled vegetable recipes, with meat being the primary ingredient. Although different dolma versions may be found across the Middle East, the Iraqi version is definitely one of the tastiest. Iraqis stuff vine leaves, peppers, and onions with minced meat, rice, nuts, and spices, which are then topped with lemon zest and tomato sauce and left to cook in a big pot.

The result? A culinary experience you won’t forget. You won't be able to stop eating these.

Iraqi kebab is unquestionably delicious, and the flavor is also quite distinctive.

The kebabs in Iraq are made with lamb or beef that has been lightly seasoned with garlic, onion, tomato, turmeric, cayenne pepper, cumin, white pepper, and parsley.

The taste and flavour of Iraqi kebab differs from other kebabs, but the proportion of lamb fat to lamb mince and the usage of a charcoal grill are the two key elements that distinguish Iraqi kebab and make it delightful.

Qeema is a classic Iraqi stew of finely diced beef with split chickpeas and a dried variety of tiny sour plums known as aloocha in middle and southern Iraq.

Iraqi qeema is typically connected with religious occasions in Iraq when the meal is prepared in large quantities and distributed to people in need. It is also traditionally eaten with cooked white basmati rice.

The beautiful thing about this dish is that it can be made vegan by removing the beef and depending on chickpeas for protein.

Tashreeb was once called a "peasant's supper" because it was so inexpensive and simple to cook, prepared with whatever ingredients were available, but today it is appreciated by all Iraqis.

Any meal served with broth-soaked bread and topped with meat or veggies is referred to as a tashreeb. That’s because the name derives from the Arabic word "tashreeb," which means "to soak."

Iraqi tashreeb is made using a layer of thick bread at the bottom of the dish, which is soaked by a layer of chicken-based broth, with meat and vegetables poured on top. It is a rich dish that's ideal for the winter months.

Open cut freshwater fish from the Tigris River was marinated with the skin on and then roasted over a low flame for hours in ancient Mesopotamia. The distinctive Iraqi technique of allowing the fish to cook while standing sideways and enabling the flames and smoke from the sides to smoke the fish differentiates Iraqi masgouf from other types of grilled fish.

The velvety flesh of the fish, flavored with olive oil, salt, tamarind, and turmeric, is a flavor you will never forget.

Margat bamia is a classic staple in almost every Iraqi family and also one of Iraqis' favorite stews.

It is an okra and lamb stew with a tomato sauce base. Ribs and shank are popular cuts of lamb used in this recipe, although you can use any part that is near to the bone.

Unlike many traditional Iraqi meals, margat bamia is not excessively spiced, which allows the natural flavors of the lamb and okra to combine and permeate the stew.

The addition of citric acid is one of the key elements that distinguish Iraqi bamia from other okra-based soups and the unique mix of green okras and red meat give it a rich flavor.

Fasoolia, which literally translates to "dry beans," is another traditional Iraqi meal.

It is the perfect comfort dish and it’s also very filling and really tasty! Not to mention quite healthy. Fasoolia is made of white or lima beans cooked till soft with meat, tomatoes and onion to make a thin yet flavorful soup and broth.

Fasoulia is frequently served as a side dish alongside white basmati rice and salads.

While bagila bil dihin, which translates as "beans with fat," sounds like a heart attack in Arabic. In reality though it isn’t unhealthy! The dish consists of layers of broth-soaked bread topped with oil-fried eggs, onions, and beans.

It's normally served with a small piece of bread on the bottom to soak up all the rich and exquisite flavors, and topped with a fried egg and oil drizzled on top and garnished with fresh lemon juice.

You should know that this Iraqi-style dish is best eaten with your hands!

Tepsi Baytinijan is a renowned and popular meal in Iraq, with each household having their own unique way of preparing it.

It is a typical Iraqi comfort food stew, which has simple flavors that are deep and fulfilling. This classic Iraqi casserole is made in a skillet before being transferred to a casserole dish, and is made up of savory fried eggplants, peppers, potatoes, onions and tomatoes baked in a delectable tomato-based sauce.

Heartwarming and delicious, It’s a favorite in many Iraqi households for a reason.